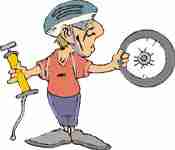 At a past General Meeting, Bob, of Pedaller's Bike Shop explained how to repair a flat bike tire. There were also some great people there from Towner's Bike Shop to show us the latest in bike offerings. Bob's talk was all about how to get the wheel off the bike, opening the brake release, and getting the chain in the lowest gear to release the tension and open the quick release to get the wheel off the frame. Then he showed how to strip the one side of the tire off the rim using tire levers or to peel the tire off with the Crank Brothers Speed Lever, which is a single lever that expands down to the axle and you just rotate the lever to remove the tire, it also puts it back on as fast as it came off (I've been carrying one for years after I saw one demonstrated). 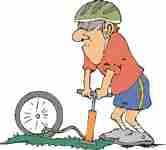 Changing the tube (after looking to make sure nothing is sticking in the tire that made it go flat in the first place) or to patch the tube with a glue-on patch or one of the quick instant patches from Park and others. He then placed a little air in the replacement tube, worked it back under the open side of the tire, pulled the tire back onto the rim starting at the opposite side from the valve, for the least resistance. Fill it up to pressure with a frame pump or one the fast CO2 systems. Mount the wheel onto the frame and place the chain on the same small cog it came from, lock down the quick release on the wheel, close the brake release and you're off and riding again.

So, if you don't have your own sag wagon or pit crew following you down the road, it's a great skill to have. Everyone should carry an extra tube that fits your tires, tire levers, patch kit and a pump or CO2 system. I'll be glad to demonstrate after a club ride or in the event of such problems when we're out on the road.